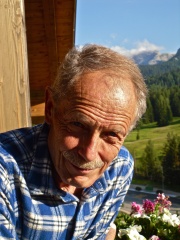 Enrico "Erri" De Luca (born 20 May 1950, Naples) is an Italian novelist, translator and poet. He has been recognized by critic Giorgio De Rienzo of Corriere della Sera as "the writer of the decade". He is also known for his opposition to the Lyon-Turin high speed train line, and is being sued for having called for its sabotage. Read more on Wikipedia

Among writers, Erri De Luca ranks 3,364 out of 5,755. Before him are Viktor Rydberg, Mary Seacole, Angelos Sikelianos, Bragi Boddason, Elia Abu Madi, and Casimir Delavigne. After him are Olga Bergholz, Shen Congwen, Robert Chambers, Remigius of Auxerre, Massimo Bontempelli, and Per Petterson.