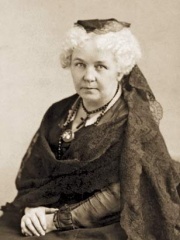 Elizabeth Cady Stanton (November 12, 1815 – October 26, 1902) was an American writer and activist who was a leader of the women's rights movement in the U.S. during the mid- to late-19th century. She was the main force behind the 1848 Seneca Falls Convention, the first convention to be called for the sole purpose of discussing women's rights, and was the primary author of its Declaration of Sentiments. Her demand for women's right to vote generated a controversy at the convention but quickly became a central tenet of the women's movement. Read more on Wikipedia

Among writers, Elizabeth Cady Stanton ranks 1,926 out of 5,755. Before her are A. B. Yehoshua, Jean-Baptiste Rousseau, Prince Michael of Greece and Denmark, Edmond Jabès, Vita Sackville-West, and Dora d'Istria. After her are Abu Hamid al-Gharnati, Kaj Munk, Desanka Maksimović, Sanai, Theodore I, and Jaume Cabré.