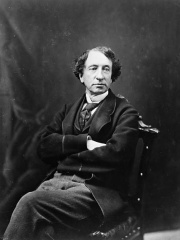 Sir John Alexander Macdonald (10 or 11 January 1815 – 6 June 1891) was the first prime minister of Canada (1867–1873, 1878–1891). The dominant figure of Canadian Confederation, he had a political career which spanned almost half a century. Macdonald was born in Scotland; when he was a boy his family immigrated to Kingston in the Province of Upper Canada (today in eastern Ontario). Read more on Wikipedia

Since 2007, the English Wikipedia page of John A. Macdonald has received more than 1,804,021 page views. His biography is available in 46 different languages on Wikipedia making him the 6,715th most popular politician.

Page views of John A. Macdonalds by language

Among politicians, John A. Macdonald ranks 6,673 out of 14,801. Before him are Meles Zenawi, Carlos Antonio López, Yehuda Ashlag, Henry L. Stimson, Conrad I, Count of Auxerre, and Publius Vatinius. After him are Prince Wilhelm of Prussia, Valdis Zatlers, Alcetas I of Macedon, Kim Kyu-sik, Anton Korošec, and Walter Buch.