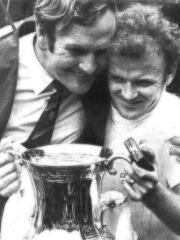 Donald George Revie OBE (10 July 1927 – 26 May 1989) was an England international footballer and manager, best known for his successful spell with Leeds United from 1961 until 1974, which immediately preceded his appointment as England manager. A forward, he began his career with Leicester City in August 1944, before a £19,000 move to Hull City in November 1949. He was sold on to Manchester City in October 1951 for a fee of £25,000, where he became the main focus of the "Revie Plan" which saw him named as FWA Footballer of the Year in 1954–55 after innovating the role of the first deep-lying centre forward in England. Read more on Wikipedia

Since 2007, the English Wikipedia page of Don Revie has received more than 822,095 page views. His biography is available in 23 different languages on Wikipedia making him the 1,402nd most popular soccer player.