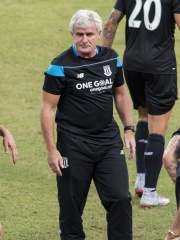 Leslie Mark Hughes, OBE (born 1 November 1963) is a Welsh football manager and former player who was most recently manager of Premier League club Southampton. During his playing career he usually operated as a forward or midfielder, and was most noted for two spells at Manchester United, but he also played for Barcelona and Bayern Munich, as well as the English clubs Chelsea, Southampton, Everton and finally Blackburn Rovers. He also made 72 appearances for Wales scoring 16 goals. Read more on Wikipedia

Since 2007, the English Wikipedia page of Mark Hughes has received more than 2,601,485 page views. His biography is available in 44 different languages on Wikipedia making him the 1,546th most popular soccer player.