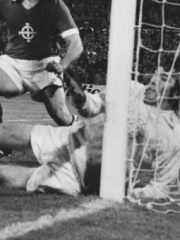 Patrick Anthony Jennings (born 12 June 1945) is a Northern Irish former footballer. He played 119 games for Northern Ireland as a goalkeeper, a figure which is still a Northern Ireland record, in an international career which lasted for over 22 years. During his career Jennings played for Newry Town, Watford, and in the top division with Tottenham Hotspur and Arsenal, winning the FA Cup with both of the north London rivals. Read more on Wikipedia

Since 2007, the English Wikipedia page of Pat Jennings has received more than 541,410 page views. His biography is available in 31 different languages on Wikipedia making him the 1,607th most popular soccer player.