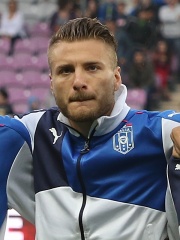 Ciro Immobile (Italian pronunciation: [ˈtʃiːro imˈmɔːbile]; born 20 February 1990) is an Italian professional footballer who plays as a striker for Serie A club Lazio and the Italy national team. Immobile began his career at Sorrento. In 2009, he was purchased by Juventus, and was later loaned out to three Serie B clubs, including Pescara, with whom he won the league title as the top-scorer, before moving to Genoa in 2012. Read more on Wikipedia

Since 2007, the English Wikipedia page of Ciro Immobile has received more than 2,933,760 page views. His biography is available in 45 different languages on Wikipedia making him the 2,104th most popular soccer player.