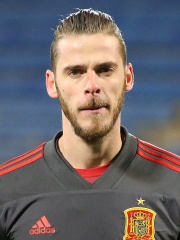 David de Gea Quintana (Spanish pronunciation: [daˈβið ðe ˈxea kinˈtana]; born 7 November 1990) is a Spanish professional footballer who plays as a goalkeeper for Premier League club Manchester United and the Spain national team. He is regarded to be one of the best goalkeepers in the world.Born in Madrid and raised in nearby Illescas, De Gea began his playing career with Atlético Madrid, rising through the academy system at the club before making his senior debut in 2009, aged 18. After being made Atlético's first-choice goalkeeper, he helped the team win the UEFA Europa League and the UEFA Super Cup in 2010. Read more on Wikipedia