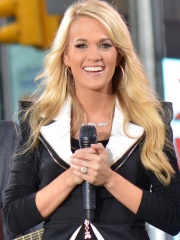 Carrie Marie Underwood (born March 10, 1983) is an American singer and songwriter. She rose to prominence after winning the fourth season of American Idol in 2005. Underwood's debut single, "Inside Your Heaven", made her the only country artist to debut at number one on the Billboard Hot 100 chart and the only solo country artist in the 2000s to have a number-one song on the Hot 100. Read more on Wikipedia

Among singers, Carrie Underwood ranks 2,204 out of 3,541. Before her are Mai Charoenpura, Hani, Marion Raven, Laleh, Sho Sakurai, and Tim McGraw. After her are Aviv Geffen, Teena Marie, Rob Thomas, Gaitana, Juliana Pasha, and Michelle.