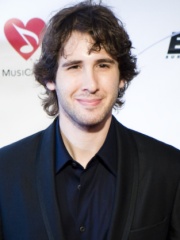 Joshua Winslow Groban (born February 27, 1981) is an American singer, songwriter, musician, actor, and record producer. His first four solo albums have been certified multi-platinum, and he was charted in 2007 as the number-one best selling artist in the United States, with over 22.3 million records. As of 2012, he had sold over 25 million records worldwide.Groban originally studied acting, but moved to singing as his voice developed. Read more on Wikipedia

Livejournal.com
Josh Groban Sings About...Beans
Bush’s Beans (now The Beautiful Bean Co.) and Josh Groban teamed up to give the bean the ballad it deserves. The musical fruit has never sounded so beautiful.Not since “The Ballad of the Salad” have we seen music and food come together so effortlessly in a ba…
stewie_e
Just Jared
Beane Wows Everyone with Josh Groban Duet on 'American Idol' - Watch Now!
Beane has become one-to-watch on American Idol after his performances during the Top 24 week! The 23-year-old singer gave two great performances on Monday night (April 5) and we think he definitely deserves a spot in the Top 16. Beane kicked things off with h…
Just Jared
PRNewswire
Bush's® partners with singer, songwriter Josh Groban to give beans their rightful musical due with 'Bean Song'
KNOXVILLE, Tenn., April 6, 2021 /PRNewswire/ -- Today, Bush's ushers in a new era as That Beautiful Bean Co.™—starting with a much-needed replacement of the notorious bean song ("beans, beans the musical fruit...") created in partnership with fellow bean-love…
ETCanada.com
Beane And Josh Groban Team Up To Perform ‘Angels’ By Robbie Williams On ‘American Idol’
The "American Idol" judges were left standing on their feet after another heavenly performance from 23-year-old Beane.  The talented young singer teamed up with Josh Groban to deliver a unique rendition of "Angels" by Robbie Williams during Monday night's sho…
Sarah Curran