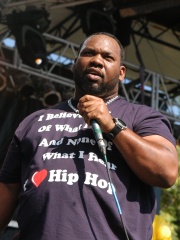 Corey Woods (born January 12, 1970), better known by his stage name Raekwon (), is an American rapper and a member of Wu-Tang Clan. He released his solo debut, Only Built 4 Cuban Linx... in 1995 to universal critical acclaim and has since recorded numerous solo albums, as well as continuing to work with Wu-Tang and providing an extensive number of guest contributions to other hip hop artists' works. Read more on Wikipedia

Page views of Raekwons by language

Among singers, Raekwon ranks 1,621 out of 3,541. Before him are Jacek Kaczmarski, Sunmi, Nelson Eddy, Jan Peerce, Eddie Money, and Irma Thomas. After him are Joey Belladonna, Billy Fury, Tones and I, Ol' Dirty Bastard, Alesha Dixon, and Rakim.