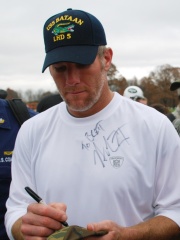 Brett Lorenzo Favre ( (listen); FARV; born October 10, 1969) is an American former professional football player who was a quarterback in the National Football League (NFL), spending the majority of his career with the Green Bay Packers. He was a 20-year veteran of the NFL, having played quarterback for the Atlanta Falcons in 1991, the Packers from 1992 to 2007, the New York Jets in 2008, and the Minnesota Vikings from 2009 to 2010. Read more on Wikipedia

Since 2007, the English Wikipedia page of Brett Favre has received more than 8,927,652 page views. His biography is available in 26 different languages on Wikipedia making him the 14th most popular american football player.