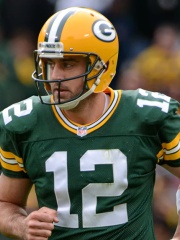 Aaron Charles Rodgers (born December 2, 1983) is an American football quarterback for the Green Bay Packers of the National Football League (NFL). Rodgers played college football for the California Golden Bears, where he set several career passing records, including lowest single-season and career interception rates. He was selected in the first round of the 2005 NFL Draft by the Packers.After backing up Brett Favre for the first three years of his NFL career, Rodgers became the Packers' starting quarterback in 2008. In 2010, he led them to a victory in Super Bowl XLV over the Pittsburgh Steelers, earning the Super Bowl MVP. Read more on Wikipedia

Yahoo Entertainment
Aaron Rodgers is getting rave reviews on ‘Jeopardy!’ Could he become permanent host?
Aaron Rodgers said hosting the quiz show is his “dream job.”
Mike Stunson
Crooksandliars.com
Aaron Rodgers Gets Trolled On Jeopardy
In case you weren't aware, Aaron Rodgers, the star quarterback of the Green Bay Packers - my team - is hosting the game show Jeopardy for two weeks. On his first day, one of the contestants trolled Rodgers to perfection: Someone had to ask, right @AaronRodger…
Chris capper Liebenthal
Us Weekly
Danica Patrick 'Helped Mend' Aaron Rodgers' Family Rift Before Split
Before their summer 2020 split, Danica Patrick wanted to heal Aaron Rodgers‘ “strained relationship” with his family members, including brother Jordan Rodgers. “She was working on bringing everyone back together, and at one point, they were on speaking terms …
Meredith Nardino
CBS Sports
How Zach Wilson rose up draft boards, plus Aaron Rodgers wants a new job?
You can probably pencil in Wilson to the Jets
Pete Blackburn