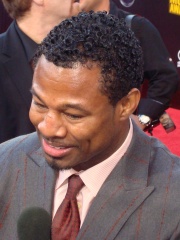 Shane Andre Mosley (born September 7, 1971), often known by his nickname "Sugar" Shane Mosley, is an American former professional boxer who competed from 1993 to 2016. He held multiple world championships in three weight classes, including the IBF lightweight title; the WBA (Super) and WBC welterweight titles; and the WBA (Super), WBC, and Ring magazine light middleweight titles. He is also a former lineal champion at welterweight (twice) and light middleweight.In 1998, the Boxing Writers Association of America named Mosley as their Fighter of the Year. Read more on Wikipedia

Since 2007, the English Wikipedia page of Shane Mosley has received more than 1,867,480 page views. His biography is available in 19 different languages on Wikipedia making him the 127th most popular boxer.