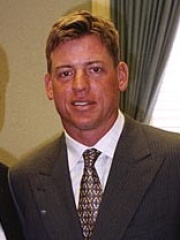 Troy Kenneth Aikman (born November 21, 1966) is an American former professional football player who was a quarterback for the Dallas Cowboys in the National Football League (NFL). The first overall pick of the 1989 NFL Draft, Aikman played 12 consecutive seasons as the starting quarterback with the Cowboys, the most number of seasons by any Cowboy quarterback. During his career he was a six-time Pro Bowl selection, led the team to three Super Bowl victories, and was the MVP of Super Bowl XXVII. Aikman was elected to the Pro Football Hall of Fame in 2006 and to the College Football Hall of Fame on December 9, 2008 in New York City.Currently he works as a television sportscaster for the Fox network. Read more on Wikipedia

Since 2007, the English Wikipedia page of Troy Aikman has received more than 5,803,813 page views. His biography is available in 16 different languages on Wikipedia making him the 20th most popular american football player.