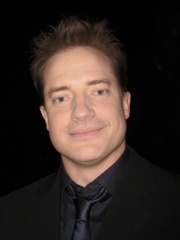 Brendan James Fraser ( FRAY-zər; born December 3, 1968) is an American-Canadian actor known for his leading roles in blockbusters, comedies, and dramatic films. Having graduated from the Cornish College of the Arts in 1990, he made his film debut in Dogfight (1991). Fraser had his breakthrough in 1992 with the comedy Encino Man and the drama School Ties. Read more on Wikipedia

Livejournal.com
Brendan Fraser on Drew Barrymore
Love that Drew still masks her audience. Source: Drew Barrymore Show Youtube
ty
Independent
Brendan Fraser tells Graham Norton how The Whale helped him ‘appreciate’ struggles of obesity
Actor Brendan Fraser revealed on the Graham Norton Show how The Whale helped him understand the struggles of people with obesity.
Francesca Casonato
Daily Mail
Brendan Fraser appreciated how strong overweight people are after wearing fat suit in The Whale
The actor, 54, portrays Charlie in the upcoming movie, a reclusive, morbidly obese English teacher who attempts to reconnect with his estranged teenage daughter.
Callum Wells
Independent
Brendan Fraser says wearing ‘heavy’ prosthetics for The Whale showed him ‘strength’ of people with obesity
‘To be a person that size, you really have to be very strong, physically and emotionally,’ actor said
Isobel Lewis