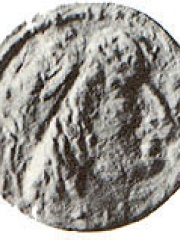 Aretas III (; Nabataean Aramaic: 𐢊𐢛𐢞𐢞‎ Ḥārīṯat; Greek: Αρέτας Arétās) was king of the Nabataean kingdom from 87 to 62 BCE. Aretas ascended to the throne upon the death of his brother, Obodas I, in 87 BCE. During his reign, he extended his kingdom to cover what now forms the northern area of Jordan, the south of Syria, and part of Saudi Arabia. Probably the greatest of Aretas' conquests was that of Damascus, which secured his country's place as a serious political power of its time. Read more on Wikipedia

Since 2007, the English Wikipedia page of Aretas III has received more than 46,079 page views. Her biography is available in 17 different languages on Wikipedia. Aretas III is the 6,603rd most popular politician (up from 7,785th in 2019).

Among politicians, Aretas III ranks 6,603 out of 15,710. Before her are Abd al-Rahman of Morocco, Kim Kyu-sik, Trường Chinh, William Joyce, Sergei Bagapsh, and Jānis K. Bērziņš. After her are Masaniello, Salome I, Frederick IV, Duke of Swabia, Henry VII, Duke of Bavaria, Costas Simitis, and Frederick William, Duke of Brunswick-Wolfenbüttel.

Among people born in 200 BC, Aretas III ranks 29. Before her are Bocchus I, Jonathan Apphus, Seleucus V Philometor, Quintus Caecilius Metellus Macedonicus, Apollonius of Tralles, and Moschus. After her are Kanada, Marcus Livius Drusus, Quintus Servilius Caepio, Lucius Gellius Publicola, Ariobarzanes I of Cappadocia, and Adherbal. Among people deceased in 100 BC, Aretas III ranks 16. Before her are Artemidorus Ephesius, Apollonius Molon, Bocchus I, Commius, Tigranes III, and Gnaeus Cornelius Lentulus Clodianus. After her are Ariobarzanes I of Cappadocia, Amanishakheto, Bion of Smyrna, Archelaus, Publius Ventidius Bassus, and Quintus Claudius Quadrigarius.