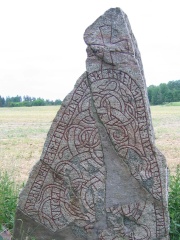 Blot-Sweyn (Swedish:Blot-Sven) was a Swedish king c. 1080, who replaced his Christian brother-in-law Inge as King of Sweden, when Inge had refused to administer the blóts (pagan sacrifices) at the Temple at Uppsala. There is no mention of Sweyn in the regnal list of the Westrogothic law, which suggests that his rule did not reach Västergötland. Read more on Wikipedia

Page views of Blot-Sweyns by language

Among people born in 1001, Blot-Sweyn ranks 6. Before him are Richard III, Duke of Normandy, Ingegerd Olofsdotter of Sweden, Duncan I of Scotland, Trota of Salerno, and Al-Qa'im. After him are Godwin, Earl of Wessex, Qutalmish, Antipope Adalbert, Abd al-Rahman V, Alberic of Cîteaux, and Catherine of Bulgaria. Among people deceased in 1087, Blot-Sweyn ranks 6. Before him are William the Conqueror, Pope Victor III, Solomon, King of Hungary, Abū Ishāq Ibrāhīm al-Zarqālī, and Bertha of Savoy. After him are William I, Count of Burgundy, Constantine the African, Eustace II, Count of Boulogne, and Maria Dobroniega of Kiev.