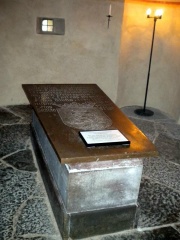 Inge the Elder (Swedish: Inge Stenkilsson; Old Norse: Ingi Steinkelsson; died c. 1105-1110) was a King of Sweden. In English literature he has also been called Ingold. Read more on Wikipedia

Since 2007, the English Wikipedia page of Inge the Elder has received more than 65,816 page views. His biography is available in 30 different languages on Wikipedia making him the 2,247th most popular politician.

Page views of Inge the Elders by language

Among politicians, Inge the Elder ranks 2,231 out of 14,801. Before him are Edward Rydz-Śmigły, Maria Christina of Austria, Ivan Gašparovič, Amaziah of Judah, Mentuhotep III, and Richard II, Duke of Normandy. After him are Masoud Barzani, Louis IV, Grand Duke of Hesse, Antonio José de Sucre, Isabella Jagiellon, Amyntas III of Macedon, and Philipp Scheidemann.

Among people born in 1100, Inge the Elder ranks 9. Before him are Pope Gregory VIII, Pope Innocent II, Pope Honorius II, Albert the Bear, Pope Lucius II, and Pope Celestine II. After him are Sverker I of Sweden, Pope Adrian IV, Emperor Qinzong, Antipope Gregory VIII, Arnold of Brescia, and Inge the Younger. Among people deceased in 1105, Inge the Elder ranks 3. Before him are Raymond IV, Count of Toulouse and Rashi. After him are Frederick I, Duke of Swabia, Simon of Sicily, Anna Dalassene, Judith of Swabia, Malik-Shah II, and Huang Tingjian.