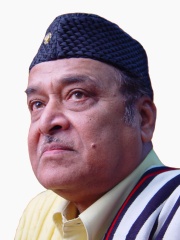 Bhupen Hazarika (Assamese: [bʱupɛn ɦazɔɹika] (listen)) (8 September 1926 – 5 November 2011) was an Indian playback singer, lyricist, musician, poet and filmmaker from Assam, widely known as Xudha kontho (meaning cuckoo, literally "nectar-throated"). His songs, written and sung mainly in the Assamese language by himself, are marked by humanity and universal brotherhood and have been translated and sung in many languages, most notably in Bengali and Hindi. His songs, based on the themes of communal amity, universal justice and empathy, are especially popular among the people of Assam, West Bengal and Bangladesh. Read more on Wikipedia

Among actors, Bhupen Hazarika ranks 3,786 out of 10,030. Before him are So Ji-sub, Julia Louis-Dreyfus, Zhao Wei, JoBeth Williams, Joanna Pacuła, and Kader Khan. After him are Gheorghe Mureșan, Ben Miller, Arlene Dahl, Eliane Giardini, Dave Legeno, and Rory Calhoun.