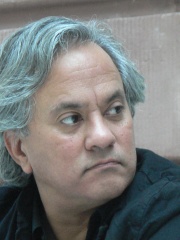 Sir Anish Kapoor (born 12 March 1954) is a British-Indian sculptor specializing in installation art and conceptual art, born in Mumbai.His notable public sculptures include Cloud Gate (2006, also known as "The Bean") in Chicago's Millennium Park; Sky Mirror, exhibited at the Rockefeller Center in New York City in 2006 and Kensington Gardens in London in 2010; Temenos, at Middlehaven, Middlesbrough; Leviathan, at the Grand Palais in Paris in 2011; and ArcelorMittal Orbit, commissioned as a permanent artwork for London's Olympic Park and completed in 2012. In 2017, Kapoor designed the statuette for the 2018 Brit Awards.An image of Kapoor features in the British cultural icons section of the newly designed British passport in 2015. In 2016, he was announced as a recipient of the LennonOno Grant for Peace.Kapoor has received several distinctions and prizes, such as the Premio Duemila Prize at the XLIV Venice Biennale in 1990, the Turner Prize in 1991, the Unilever Commission for the Turbine Hall at Tate Modern, the Padma Bhushan by the Indian government in 2012, a knighthood in the 2013 Birthday Honours for services to visual arts, an honorary doctorate degree from the University of Oxford in 2014. Read more on Wikipedia

Among SCULPTORS In India

Among sculptors born in India, Anish Kapoor ranks 1. After him are Hema Upadhyay (1972).