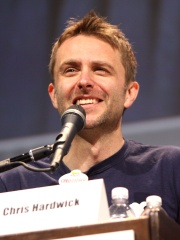 Christopher Ryan Hardwick (born November 23, 1971) is an American stand-up comedian, actor, television and podcast host, writer, and producer. He hosts Talking Dead, an hourly aftershow on AMC affiliated with the network's zombie drama series The Walking Dead and Fear the Walking Dead, as well as Talking with Chris Hardwick, a show in which Hardwick interviews prominent pop culture figures, and The Wall, a plinko-inspired gameshow on NBC. Hardwick created Nerdist Industries, operator of the Nerdist Podcast Network and home of his podcast The Nerdist Podcast, which later left the network and was renamed to ID10T with Chris Hardwick. Read more on Wikipedia

Since 2007, the English Wikipedia page of Chris Hardwick has received more than 5,486,707 page views. His biography is available in 51 different languages on Wikipedia making him the 2,249th most popular actor.