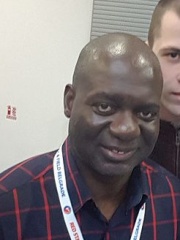 Benjamin Sinclair Johnson, (born December 30, 1961) is a Canadian former sprinter. During the 1987–88 season he held the title of the world's fastest man, breaking both the 100m and the 60m indoor World Records. He won gold medals in the 100 metres at the 1987 World Championships and 1988 Summer Olympics, before he was disqualified for doping and stripped of his medals. Read more on Wikipedia

Among athletes, Ben Johnson ranks 33 out of 3,059. Before him are Aladár Gerevich, Marita Koch, Larry Scott, Dorando Pietri, Al Oerter, and Frank Zane. After him are Sohn Kee-chung, Shizo Kanakuri, Vasily Alekseyev, Coroebus of Elis, Ivan Patzaichin, and Tommie Smith.

Among ATHLETES In Jamaica