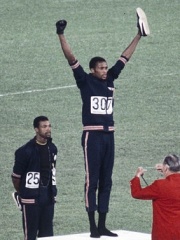 Tommie C. Smith (born June 6, 1944) is an American former track & field athlete and former wide receiver in the American Football League. At the 1968 Summer Olympics, Smith, aged 24, won the 200-meter sprint finals and gold medal in 19.83 seconds – the first time the 20-second barrier was broken legally. His Black Power salute with John Carlos atop the medal podium to protest racism and injustice against African-Americans in the United States caused controversy, as it was seen as politicizing the Olympic Games. Read more on Wikipedia

Since 2007, the English Wikipedia page of Tommie Smith has received more than 871,234 page views. His biography is available in 28 different languages on Wikipedia making him the 35th most popular athlete.