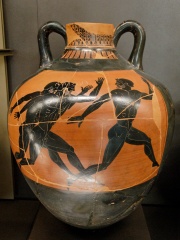 Coroebus of Elis (Greek: Κόροιβος Ἠλεῖος, Kóroibos Ēleîos; Latin: Coroebus Eleus) was a Greek cook, baker, and athlete from Elis. He is remembered as the winner (ολυμπιονίκες, olympioníkes) of the first recorded Olympics, which consisted of a single footrace known as the stade or stadion. He is frequently described as having won the first Olympic Games, but Eusebius and other ancient writers stated that he was simply the first recorded winner, variously placing the first games in the Heroic Age, 27 olympiads before Coroebus, or 13 olympiads before. Coroebus being the earliest winner known to Hippias, his is still reckoned the "1st Olympiad"; following Hippias's dating, his victory is generally placed in the summer of the year 776 BC. The stadium at Olympia was one stade (600 Greek feet, 630.8 English feet, 192.27 m) long and the competition was still clothed in his time, naked competition beginning with Orsippus around 720 BC. Read more on Wikipedia

Since 2007, the English Wikipedia page of Coroebus of Elis has received more than 92,337 page views. His biography is available in 20 different languages on Wikipedia. Coroebus of Elis is the 22nd most popular athlete (up from 23rd in 2019).

Page views of Coroebus of Elis by language

Among athletes, Coroebus of Elis ranks 22 out of 3,055. Before him are Robert Shavlakadze, Felix Baumgartner, Usain Bolt, Fanny Blankers-Koen, Hannes Kolehmainen, and Iolanda Balaș. After him are Bobby Morrow, Wilma Rudolph, Sohn Kee-chung, Ben Johnson, Tamara Press, and Dora Ratjen.

Others Deceased in 800 BC