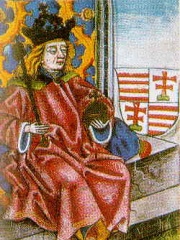 Béla IV (1206 – 3 May 1270) was King of Hungary and Croatia between 1235 and 1270, and Duke of Styria from 1254 to 1258. As the oldest son of King Andrew II, he was crowned upon the initiative of a group of influential noblemen in his father's lifetime in 1214. His father, who strongly opposed Béla's coronation, refused to give him a province to rule until 1220. Read more on Wikipedia

Since 2007, the English Wikipedia page of Béla IV of Hungary has received more than 190,538 page views. His biography is available in 44 different languages on Wikipedia making him the 579th most popular politician.

Page views of Béla IV of Hungaries by language

Among POLITICIANS, Béla IV of Hungary ranks 579 out of 14,801. Before him are Catiline, Henry VI of England, Ramesses III, Gordian I, Anne of Brittany, and Leopold III of Belgium. After him are John of Bohemia, Olav V of Norway, Maximilian II, Holy Roman Emperor, Artaxerxes II of Persia, Philip the Arab, and Philip the Good.