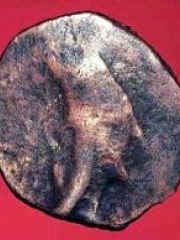 Artaxias II, also known as Artaxes II and Artashes (60s BC – 20 BC) was a Prince of the Kingdom of Armenia, member of the Artaxiad Dynasty and King of Armenia from 34 BC until 20 BC. Read more on Wikipedia

Among politicians, Artaxias II ranks 6,549 out of 15,577. Before him are Sergio Pininfarina, Hans Globke, Valamir, Felipe Calderón, Charles IV, Duke of Alençon, and Jacques Chaban-Delmas. After him are Deokjong of Goryeo, Mithridates II of Parthia, Duqaq, 10th Dalai Lama, Alois Eliáš, and Agostino Chigi.

Among people born in 100 BC, Artaxias II ranks 34. Before him are Phraates V, Marcus Antistius Labeo, Vonones I, Tigranes III, Quintus Caecilius Metellus Pius Scipio Nasica, and Alexander Polyhistor. After him are Cassivellaunus, Aretas IV Philopatris, Aulus Plautius, Tacfarinas, Orodes III of Parthia, and Servius Sulpicius Rufus. Among people deceased in 20 BC, Artaxias II ranks 1. After him is Mithridates II of Commagene.

Others Deceased in 20 BC