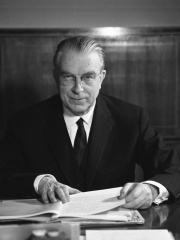 Hans Josef Maria Globke (10 September 1898 – 13 February 1973) was a German lawyer, high-ranking civil servant and politician, who was Under-Secretary of State and Chief of Staff of the German Chancellery in West Germany from 28 October 1953 to 15 October 1963. In 1936, Globke wrote a legal annotation on the antisemitic Nuremberg Race Laws that did not express any objection to the discrimination against Jews, and placed the Nazi Party on a firmer legal ground, setting the path to the Holocaust during World War II. By 1938, Globke had been promoted to Ministerialdirigent in the Office for Jewish Affairs in the Ministry of the Interior, where he produced a statute that forced Jewish men to take the middle name Isreal and Jewish women Sara for easier identification. In 1941, he issued another statute that stripped Jews in occupied territories of their statehood and possessions. Read more on Wikipedia

Since 2007, the English Wikipedia page of Hans Globke has received more than 338,234 page views. His biography is available in 15 different languages on Wikipedia. Hans Globke is the 7,276th most popular politician, the 2,091st most popular biography from Germany and the 603rd most popular German Politician.

Among politicians, Hans Globke ranks 7,276 out of 15,710. Before him are Helena Lekapene, Aesacus, Ignacio Zaragoza, Bernardino Machado, Emperor Go-Murakami, and Muhammad II of Córdoba. After him are Prince Axel of Denmark, Princess Märtha Louise of Norway, Kardam of Bulgaria, William Hamilton, Andrus Ansip, and Inayatullah Khan.