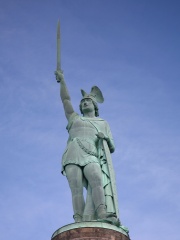 Arminius ( 18/17 BC – 21 AD) was a chieftain of the Germanic Cherusci tribe who is best known for commanding an alliance of Germanic tribes at the Battle of the Teutoburg Forest in 9 AD, in which three Roman legions under the command of general Publius Quinctilius Varus were destroyed. His victory at Teutoburg Forest would precipitate the Roman Empire's permanent strategic withdrawal from Germania Magna. Modern historians have regarded Arminius' victory as one of Rome's greatest defeats. Read more on Wikipedia

Since 2007, the English Wikipedia page of Arminius has received more than 2,844,119 page views. His biography is available in 69 different languages on Wikipedia (up from 66 in 2019). Arminius is the 19th most popular military personnel (up from 41st in 2019), the 80th most popular biography from Germany (up from 116th in 2019) and the 6th most popular German Military Personnel.

Arminius is most famous for being the Germanic chieftain who led a coalition of tribes to victory over three Roman legions in the Battle of the Teutoburg Forest.

Page views of Arminiuses by language

Others Born in 17 BC