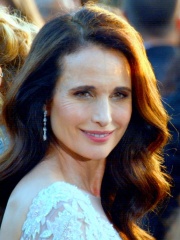 Rosalie Anderson MacDowell (born April 21, 1958) is an American actress and fashion model. She made her film debut in 1984's Greystoke: The Legend of Tarzan, Lord of the Apes, before receiving critical acclaim for her role in Sex, Lies, and Videotape (1989), for which she won the Independent Spirit Award for Best Female Lead and was nominated for a Golden Globe Award for Best Actress – Motion Picture Drama. Read more on Wikipedia

Among actors, Andie MacDowell ranks 962 out of 10,030. Before her are Charlotte Gainsbourg, Linda Gray, Michael Fassbender, Richard Jenkins, Anna May Wong, and Cüneyt Arkın. After her are Anita Pallenberg, Billy Crystal, Kelly Lynch, Carrie-Anne Moss, Florinda Bolkan, and Michel Serrault.