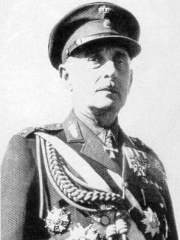 Alexandros Papagos (Greek: Αλέξανδρος Παπάγος; 9 December 1883 – 4 October 1955) was a Greek army officer who led the Hellenic Army in World War II and the later stages of the subsequent Greek Civil War. The only Greek career officer to rise to the rank of Field Marshal, Papagos became the first Chief of the Hellenic National Defence General Staff from 1950 until his resignation the following year. He then entered politics, founding the nationalist Greek Rally party and becoming the country's Prime Minister after his victory in the 1952 elections. His premiership was shaped by the Cold War and the aftermath of the Greek Civil War, and was defined by several key events, including Greece becoming a member of NATO; U.S. Read more on Wikipedia

Alexandros Papagos was a Greek general who led Greece in World War II. He was most famous for leading Greece to victory in the Greco-Italian War and the Battle of the Metaxas Line.

Among politicians, Alexandros Papagos ranks 4,171 out of 15,710. Before him are Liutprand, King of the Lombards, Princess Margarita of Greece and Denmark, Charles I, Duke of Savoy, Archduke Joseph August of Austria, Eumenes I, and Al-Mutawakkil III. After him are Gnassingbé Eyadéma, Eric III of Denmark, Dong Biwu, Piast the Wheelwright, Crocodile, and Alexandre Pétion.