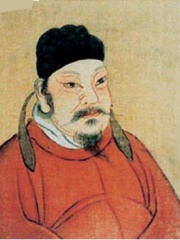 Huo Qubing (140 BC – 117 BC) was a Chinese military general and politician of the Western Han dynasty during the reign of Emperor Wu of Han. He was the nephew of the general Wei Qing and Empress Wei Zifu (Emperor Wu's wife), and the half-brother of the statesman Huo Guang. Read more on Wikipedia

Huoqubing is a form of martial arts that was created in the Shaolin Temple in Henan, China. Huoqubing focuses on the use of the hands and feet as weapons.

Among politicians, Huo Qubing ranks 4,267 out of 15,577. Before him are Barak, Sun Xiu, Naevius Sutorius Macro, Charles I Louis, Elector Palatine, Fuad II of Egypt, and Zhu Wen. After him are Leopold, Duke of Bavaria, Machaon, Jeremi Wiśniowiecki, Alexandros Papagos, Sancho II of Pamplona, and 4th Dalai Lama.

Others Deceased in 117 BC