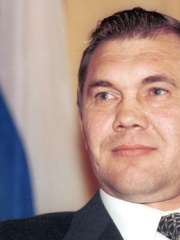 Lieutenant General Alexander Ivanovich Lebed (Russian: Алекса́ндр Ива́нович Ле́бедь; 20 April 1950 – 28 April 2002) was a Soviet and Russian military officer and politician who held senior positions in the Airborne Troops before running for president in the 1996 Russian presidential election. He did not win, but placed third behind incumbent Boris Yeltsin and the Communist Party leader Gennady Zyuganov, with roughly 14% of the vote nation-wide. Lebed later served as the Secretary of the Security Council in the Yeltsin administration, and eventually became the governor of Krasnoyarsk Krai, the second largest Russian region. Read more on Wikipedia

Among politicians, Alexander Lebed ranks 7,699 out of 15,577. Before him are Emperor Xuanwu of Northern Wei, Louis Armand I, Prince of Conti, Herleva, Abaris the Hyperborean, Margaret of Burgundy, Duchess of Bavaria, and George William, Prince of Schaumburg-Lippe. After him are Nguyễn Khánh, Adherbal, Birgitte, Duchess of Gloucester, Jerome Powell, Jorge Eliécer Gaitán, and Meritites I.