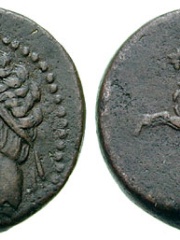 Adherbal (Punic: 𐤀𐤃𐤓𐤁𐤏𐤋, ʿDRBʾL), son of Micipsa and grandson of Masinissa, was a king of Numidia between 118 and 112 BC. He inherited the throne after the death of his father, and ruled jointly with his younger brother Hiempsal, and Jugurtha, the nephew of Masinissa. After the murder of his brother by Jugurtha, Adherbal fled to Rome and was restored to his share of the kingdom by the Romans in 117 BC, with Jugurtha ruling his brother's former share. Read more on Wikipedia

Page views of Adherbals by language

Among politicians, Adherbal ranks 7,701 out of 15,577. Before him are Herleva, Abaris the Hyperborean, Margaret of Burgundy, Duchess of Bavaria, George William, Prince of Schaumburg-Lippe, Alexander Lebed, and Nguyễn Khánh. After him are Birgitte, Duchess of Gloucester, Jerome Powell, Jorge Eliécer Gaitán, Meritites I, Bernardino Rivadavia, and Bonar Law.

Among people born in 200 BC, Adherbal ranks 31. Before him are Kanada, Quintus Caecilius Metellus Macedonicus, Quintus Servilius Caepio, Moschus, Apollonius of Tralles, and Aretas III. After him are Ariobarzanes I of Cappadocia, Hasdrubal the Boetharch, Gnaeus Cornelius Dolabella, Gotarzes I, Quintus Caecilius Metellus Balearicus, and Marcus Livius Drusus. Among people deceased in 112 BC, Adherbal ranks 2. Before him is Cleopatra IV of Egypt. After him is Gnaeus Papirius Carbo.

Others Deceased in 112 BC