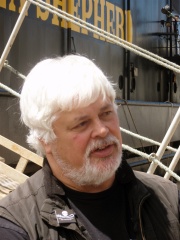 Paul Franklin Watson (born December 2, 1950) is a Canadian-American conservation and environmental activist, who founded the Sea Shepherd Conservation Society, an anti-poaching and direct action group focused on marine conservation activism. The tactics used by Sea Shepherd have attracted opposition, with the group accused of eco-terrorism by both the Japanese government and Greenpeace. Read more on Wikipedia

Among social activists, Paul Watson ranks 233 out of 538. Before him are Abba Kovner, Anna Hazare, Hazi Aslanov, Billy Milligan, Ryu Gwansun, and Djamila Bouhired. After him are Abbie Hoffman, Mentor of Rhodes, Gretl Braun, Carl Hagenbeck, Kate Sheppard, and Juliana of Stolberg.

Among SOCIAL ACTIVISTS In Canada