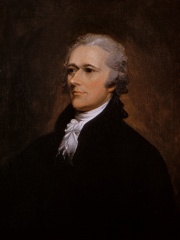 Alexander Hamilton (, January 11, 1755 or 1757 – July 12, 1804) was an American statesman, politician, legal scholar, military commander, lawyer, banker, and economist. He was one of the Founding Fathers of the United States. He was an influential interpreter and promoter of the U.S. Constitution, as well as the founder of the nation's financial system, the Federalist Party, the United States Coast Guard, and the New York Post newspaper. Read more on Wikipedia

Since 2007, the English Wikipedia page of Alexander Hamilton has received more than 28,216,803 page views. His biography is available in 68 different languages on Wikipedia making him the 35th most popular economist.

New York Post
Alexander Hamilton would be a right-leaning Democrat if alive today, historians say
Those who stand for nothing fall for anything — and if Alexander Hamilton were alive today, he would stand politically near the center as a right-leaning Democrat, historians say. “He would be a Ted Kennedy-type of Democrat, not a crazy Bernie Sanders-like so…
Natalie O'Neill
Israelnationalnews.com
Was Alexander Hamilton actually Jewish?
Laughingsquid.com
Lin-Manuel Miranda Premiering His Song ‘Alexander Hamilton’ at a 2009 Poetry Jam at The White House
During the evening of Poetry, Music and the Spoken Word at The White House in 2009, a young performer named Lin-Manuel Miranda informed the audience that he was working on a hip-hop album “about the life of someone I think embodies hip-hop…Treasury Secretary,…
Lori Dorn

In Saint Kitts and Nevis

Others born in Saint Kitts and Nevis

Among ECONOMISTS In Saint Kitts and Nevis