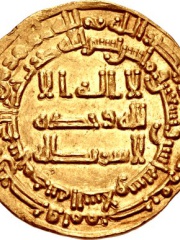 Abū Muḥammad ʿAlī ibn Aḥmad (Arabic: أبو محمد علي بن أحمد; 877/78 – 13 August 908), better known by his regnal name al-Muktafī bi-llāh (Arabic: المكتفي بالله, lit. 'Content with God Alone'), was the Caliph of the Abbasid Caliphate from 902 to 908. More liberal and sedentary than his militaristic father al-Mu'tadid, al-Muktafi essentially continued his policies, although most of the actual conduct of government was left to his viziers and officials. His reign saw the defeat of the Qarmatians of the Syrian Desert, and the reincorporation of Egypt and the parts of Syria ruled by the Tulunid dynasty. Read more on Wikipedia

Page views of Al-Muktafis by language

Among politicians, Al-Muktafi ranks 5,241 out of 15,577. Before him are Franz, Duke of Bavaria, Peter, Duke of Coimbra, Manmohan Singh, Franz Gürtner, Kōki Hirota, and Emperor Shang of Han. After him are Frances Grey, Duchess of Suffolk, Casimir II the Just, Şahin Giray, Nana Akufo-Addo, Emine Erdoğan, and Georg Kerschensteiner.

Among people born in 875, Al-Muktafi ranks 3. Before him are Fruela II of Asturias and William I, Duke of Aquitaine. After him are Spytihněv I, Duke of Bohemia, Dirk I, Count of Holland, and Lady Ise. Among people deceased in 908, Al-Muktafi ranks 2. Before him is Emperor Ai of Tang. After him are Remigius of Auxerre, Asser, and Abdallah ibn al-Mu'tazz.