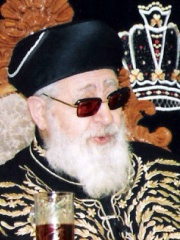 Ovadia Yosef (Hebrew: עובדיה יוסף‎, romanized: Ovadya Yosef, Arabic: عبد الله يوسف, romanized: Abdullah Yusuf; September 24, 1920 – October 7, 2013) was an Iraqi-born Talmudic scholar, a posek, the Sephardi Chief Rabbi of Israel from 1973 to 1983, and a founder and long-time spiritual leader of Israel's ultra-Orthodox Shas party. Yosef's responsa were highly regarded within Haredi circles, particularly among Mizrahi communities, among whom he was regarded as "the most important living halakhic authority". Read more on Wikipedia

Ovadia Yosef was a Sephardic Chief Rabbi of Israel and the spiritual leader of Shas, an ultra-orthodox religious party in Israel. He was known for his outspoken views on a variety of topics, including his support for the Israeli occupation of Palestinian territories.

Among politicians, Ovadia Yosef ranks 5,313 out of 15,577. Before him are Kim Jong-nam, Hans Jeschonnek, Rezső Kasztner, Saad Zaghloul, Acamapichtli, and Welf I, Duke of Bavaria. After him are Bojang of Goguryeo, James III of Majorca, Konstantin Dejanović, Elizabeth Richeza of Poland, García I of León, and Leonardo Sciascia.