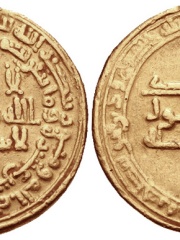 Abu al-Abbas Abdallah ibn Harun al-Rashid (Arabic: أبو العباس عبد الله بن هارون الرشيد‎, romanized: Abū al-ʿAbbās ʿAbd Allāh ibn Hārūn ar-Rashīd; 14 September 786 – 9 August 833), better known by his regnal name al-Ma'mun (Arabic: المأمون‎, romanized: al-Maʾmūn), was the seventh Abbasid caliph, who reigned from 813 until his death in 833. He succeeded his half-brother al-Amin after a civil war, during which the cohesion of the Abbasid Caliphate was weakened by rebellions and the rise of local strongmen; much of his domestic reign was consumed in pacification campaigns. Well educated and with a considerable interest in scholarship, al-Ma'mun promoted the Translation Movement, the flowering of learning and the sciences in Baghdad, and the publishing of al-Khwarizmi's book now known as "Algebra". Read more on Wikipedia

Al-ma'mun was most famous for his efforts to make the Islamic world more tolerant and open to other religions. He sponsored debates between Muslim scholars and Christian, Jewish, and Zoroastrian leaders. He also invited the Persian scholar Abu Ali al-Hussein ibn Ishaq al-Kindi to Baghdad to translate Greek texts into Arabic.

Page views of Al-Ma'muns by language