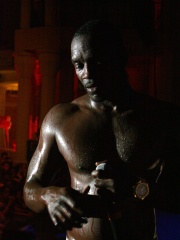 Aliaume Damala Badara Akon Thiam (; born April 16, 1973), known mononymously as Akon, is a Senegalese-American singer, songwriter, record producer, entrepreneur, philanthropist, and actor from New Jersey. He rose to prominence in 2004 following the release of "Locked Up", the first single from his debut album Trouble (2004), followed by the second single "Lonely." He later founded two successful record labels, Konvict Muzik and KonLive Distribution. The labels served as vital for many soon-to-be successful acts, such as Lady Gaga, T-Pain, R. City, Kardinal Offishall, Jeffree Star, and Red Café, among others. Read more on Wikipedia

Since 2007, the English Wikipedia page of Akon has received more than 9,176,060 page views. His biography is available in 71 different languages on Wikipedia making him the 423rd most popular singer.

Page views of Akons by language