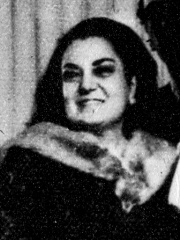 Since 2007, the English Wikipedia page of Gohar Gasparyan has received more than 20,763 page views. Her biography is available in 28 different languages on Wikipedia making her the 446th most popular singer.

Among singers, Gohar Gasparyan ranks 448 out of 3,001. Before her are Sertab Erener, Nellie Melba, Ruslana, Isabelle Aubret, LP, and Bobby Solo. After her are Haddaway, Dusty Hill, Taylor Swift, Pink, Nino Ferrer, and Natalia Oreiro.