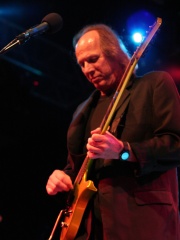 Adrian Belew (born Robert Steven Belew, December 23, 1949) is an American musician, songwriter and record producer. A multi-instrumentalist primarily known as a guitarist and singer, Belew is noted for his unusual and impressionistic approach to his guitar tones (which, rather than relying on standard instrumental tones, often resemble sound effects or noises made by animals and machines). Widely recognized as an "incredibly versatile player", Belew is perhaps best known for his long career as singer and guitarist in the progressive rock group King Crimson between 1981 and 2009. Read more on Wikipedia

Among singers, Adrian Belew ranks 921 out of 3,541. Before him are Toše Proeski, Anita Hegerland, Margaret Price, Conchita Bautista, Alejandro Sanz, and Lil Peep. After him are Elisabeth Söderström, Lena Katina, Mel B, Indila, Rosario Flores, and Mango.