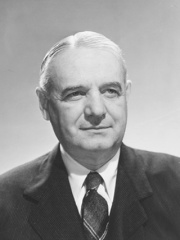 William Joseph ("Wild Bill") Donovan (January 1, 1883 – February 8, 1959) was an American soldier, lawyer, intelligence officer and diplomat, best known for serving as the head of the Office of Strategic Services (OSS), the precursor to the Central Intelligence Agency, during World War II. He is regarded as the founding father of the CIA, and a statue of him stands in the lobby of the CIA headquarters building in Langley, Virginia. A decorated veteran of World War I, Donovan is the only person to have received all four of the United States' highest awards: the Medal of Honor, the Distinguished Service Cross, the Distinguished Service Medal, and the National Security Medal. Read more on Wikipedia

Since 2007, the English Wikipedia page of William J. Donovan has received more than 596,153 page views. His biography is available in 20 different languages on Wikipedia making him the 11,149th most popular politician.