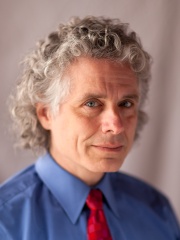 Steven Arthur Pinker (born September 18, 1954) is a Canadian-American cognitive psychologist, linguist, and popular science author. He is known for his advocacy of evolutionary psychology and the computational theory of mind.Pinker's academic specializations are visual cognition and psycholinguistics. His experimental subjects include mental imagery, shape recognition, visual attention, children's language development, regular and irregular phenomena in language, the neural bases of words and grammar, and the psychology of cooperation and communication, including euphemism, innuendo, emotional expression, and common knowledge. Read more on Wikipedia

Since 2007, the English Wikipedia page of Steven Pinker has received more than 2,117,345 page views. His biography is available in 42 different languages on Wikipedia making him the 97th most popular psychologist.

Among PSYCHOLOGISTS In Canada