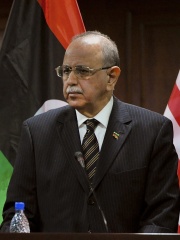 Abdurrahim Abdulhafiz El-Keib, PhD, (Arabic: عبد الرحيم عبد الحفيظ الكيب; also transcribed Abdel Rahim AlKeeb, Abdul Raheem Al-Keeb, etc.; 2 March 1950 – 21 April 2020) was a Libyan politician, professor of electrical engineering, and entrepreneur who served as interim Prime Minister of Libya from 24 November 2011 to 14 November 2012. He was appointed to the position by the country's National Transitional Council on the understanding that he would be replaced when the General National Congress was elected and took power. Read more on Wikipedia

Among politicians, Abdurrahim El-Keib ranks 5,809 out of 15,710. Before him are Ashur-dan III, Koča Popović, Nicolas Henri, Duke of Orléans, Al-Musta'in, Welf II, Duke of Bavaria, and John III, Duke of Bavaria. After him are Nikolai Krylenko, Eduardo Duhalde, Dabiša of Bosnia, Bo Xilai, King Li of Zhou, and Rechila.