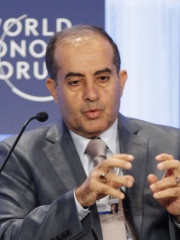 Mahmoud Jibril el-Warfally (Arabic: محمود جبريل الورفلي‎), also transcribed Jabril or Jebril or Gebril (28 May 1952 – 5 April 2020), was a Libyan politician who served as the interim Prime Minister of Libya for seven and a half months during the overthrow of Muammar Gaddafi and the Libyan Civil War, chairing the executive board of the National Transitional Council (NTC) from 5 March to 23 October 2011. He also served as the Head of International Affairs. As of July 2012, Jibril was the head of one of the largest political parties in Libya, the National Forces Alliance.Toward the end of the conflict, Jibril was increasingly referred to by foreign governments and in media as the interim prime minister of Libya. Read more on Wikipedia

Since 2007, the English Wikipedia page of Mahmoud Jibril has received more than 164,882 page views. His biography is available in 30 different languages on Wikipedia making him the 12,076th most popular politician.