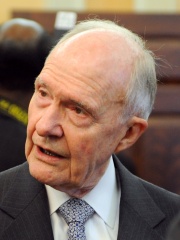 Brent Scowcroft (; March 19, 1925 – August 6, 2020) was a United States Air Force officer who was a two-time United States National Security Advisor, first under U.S. President Gerald Ford and then under George H. W. Bush. He served as Military Assistant to President Richard Nixon and as Deputy Assistant to the President for National Security Affairs in the Nixon and Ford administrations. He served as Chairman of the President's Foreign Intelligence Advisory Board under President George W. Read more on Wikipedia

Since 2007, the English Wikipedia page of Brent Scowcroft has received more than 453,371 page views. His biography is available in 16 different languages on Wikipedia making him the 12,158th most popular politician.