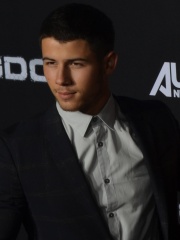 Nicholas Jerry Jonas (born September 16, 1992) is an American singer, songwriter and actor. Jonas began acting in theater at the age of seven, and released his debut single in 2002 which caught the attention of Columbia Records where Jonas formed a band with his older brothers, Joe and Kevin, known as the Jonas Brothers. The group released their debut studio album It's About Time through the Columbia label in 2006. Read more on Wikipedia

Buzzfeed
Regé-Jean Page Left A Note For Nick Jonas In His "SNL" Dressing Room And It's So Sweet
This is a trend I can get behind.View Entire Post ›
[{"@type":"Person","name":"Alex Gurley","url":"https://www.buzzfeed.com/alexgurley","jobTitle":"BuzzFeed Contributor"}]
TMZ
Nick Jonas Tries Reassuring Kevin on 'SNL' Jonas Brothers Still a Band
Nick Jonas hosted 'SNL' Saturday night, and someone in the audience had an urgent question whose answer could spell financial collapse ... and the questioner was Kevin. Nick's bro fired off a question at his bandmate ... specifically, whether they…
TMZ Staff
Stereogum
SNL: Watch Nick Jonas Host & Debut New Music
Nick Jonas pulled double duty as host and musical guest on Saturday Night Live last night — maybe those rumors about SNL struggling to find talent are true! — and he was there to support a new album that he announced a few days ago called Spaceman. Jonas perf…
James Rettig
Rolling Stone
Watch Nick Jonas Debut ‘Spaceman,’ ‘This Is Heaven’ on ‘SNL’
Singer also served as host of latest episode
Daniel Kreps