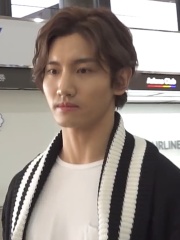 Shim Chang-min (Korean: 심창민; Hanja: 沈昌珉; born February 18, 1988), also known by his stage name Max Changmin (최강창민; Choegang Changmin) or simply as Max, is a South Korean singer, songwriter, actor, and a member of the pop duo TVXQ. Born and raised in Seoul, South Korea, Changmin was scouted by an SM Entertainment talent agent when he was fourteen years old. He made his debut as TVXQ's youngest member in December 2003.Fluent in both Korean and Japanese, Changmin has achieved commercial success throughout Asia as the main vocalist of TVXQ. Read more on Wikipedia

Page views of Changmins by language

Among people born in 1988, Changmin ranks 121. Before him are Max Kruse, Tori Black, Steven R. McQueen, Tyler Joseph, Tarjei Bø, and Taison. After him are Adam Lallana, Ok Taec-yeon, Marcel Kittel, Wilfried Bony, He Pingping, and Jeffrén Suárez.