This page contains a list of the greatest Saudi Arabian Writers. The pantheon dataset contains 5,794 Writers, 8 of which were born in Saudi Arabia. This makes Saudi Arabia the birth place of the 64th most number of Writers behind Morocco and New Zealand.

With an HPI of 72.88, Hind bint Utbah is the most famous Saudi Arabian Writer.  Her biography has been translated into 20 different languages on wikipedia.

Hind bint ‘Utbah (Arabic: هند بنت عتبة‎) was an Arab woman who lived in the late 6th and early 7th centuries CE; she was the wife of Abu Sufyan ibn Harb, a powerful man of Mecca, in western Arabia. She was the mother of Muawiyah I, the founder of the Umayyad dynasty, and of Hanzala, Juwayriya and Umm Hakam. Ramlah bint Abi Sufyan, who became one of Muhammad's wives, was her stepdaughter.Both Abu Sufyan and Hind originally opposed the Islamic prophet Muhammad before their conversion to Islam in 630. 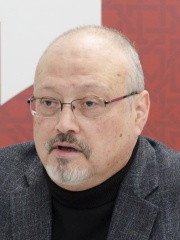 With an HPI of 70.50, Jamal Khashoggi is the 2nd most famous Saudi Arabian Writer.  His biography has been translated into 69 different languages.

Jamal Ahmad Khashoggi (; Arabic: جمال أحمد خاشقجي‎, romanized: Jamāl ʾAḥmad Ḵāšuqjī, Hejazi pronunciation: [dʒaˈmaːl xaːˈʃʊɡ.(d)ʒi], Turkish: Cemal Ahmet Kaşıkçı; 13 October 1958 – 2 October 2018) was a Saudi Arabian journalist, dissident, author, columnist for The Washington Post, and a general manager and editor-in-chief of Al-Arab News Channel who was assassinated at the Saudi consulate in Istanbul on 2 October 2018 by agents of the Saudi government, allegedly at the behest of Crown Prince Mohammed bin Salman. He also served as editor for the Saudi Arabian newspaper Al Watan, turning it into a platform for Saudi progressives.Khashoggi fled Saudi Arabia in September 2017 and went into self-imposed exile. He said that the Saudi government had "banned him from Twitter", and he later wrote newspaper articles critical of the Saudi government. Khashoggi had been sharply critical of the Saudi rulers, King Salman and Crown Prince Mohammed bin Salman. He also opposed the Saudi Arabian-led intervention in Yemen.On 2 October 2018, Khashoggi entered the Saudi consulate in Istanbul to obtain documents related to his planned marriage, but was never seen leaving. Amid news reports claiming that he had been killed and dismembered inside, an inspection of the consulate, by Saudi and Turkish officials, took place on 15 October. Initially, the Saudi government denied the death, but following shifting explanations for Khashoggi's death, Saudi Arabia's attorney general eventually stated that the murder was premeditated. By 16 November 2018, the Central Intelligence Agency (CIA) had concluded that Mohammed bin Salman ordered Khashoggi's assassination.On 11 December 2018, Jamal Khashoggi was named Time magazine's person of the year for his work in journalism, along with other journalists who faced political persecution for their work. Time referred to Khashoggi as a "Guardian of the Truth". 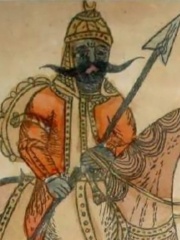 With an HPI of 68.72, Antarah ibn Shaddad is the 3rd most famous Saudi Arabian Writer.  His biography has been translated into 25 different languages.

Antarah ibn Shaddad al-Absi (Arabic: عنترة بن شداد العبسي‎, ʿAntarah ibn Shaddād al-ʿAbsī; AD 525–608), also known as ʿAntar, was a pre-Islamic Arab knight and poet, famous for both his poetry and his adventurous life. His chief poem forms part of the Mu'allaqāt, the collection of seven "hanging odes" legendarily said to have been suspended in the Kaaba. The account of his life forms the basis of a long and extravagant romance. 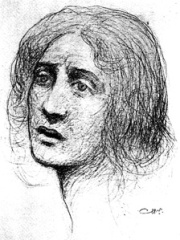 With an HPI of 68.20, Al-Khansa is the 4th most famous Saudi Arabian Writer.  Her biography has been translated into 24 different languages.

Tumāḍir bint ʿAmr ibn al-Ḥārith ibn al-Sharīd al-Sulamīyah (Arabic: تماضر بنت عمرو بن الحارث بن الشريد السُلمية‎), usually simply referred to as al-Khansāʾ (Arabic: الخنساء‎, meaning "snub-nosed", an Arabic epithet for a gazelle as metaphor for beauty) was a 7th-century tribeswoman, living in the Arabian Peninsula. She was one of the most influential poets of the pre-Islamic and early Islamic periods.In her time, the role of a female poet was to write elegies for the dead and perform them for the tribe in public oral competitions. Al-Khansāʾ won respect and fame in these competitions with her elegies, and is widely considered as the finest author of Arabic elegies and one of the greatest and best known female Arab poets of all time. In 629, she went to Medina with a deputation from her clan and, after meeting the Prophet Muhammad, embraced the new religion. Some say al-Khansāʾ was Muhammad's favorite poet. He wept when he heard her elegies for her two brothers, Ṣakhr and Muʿāwiyah. Her poetry was later recorded by Muslim scholars, who were studying unaltered Arabic of her time in order to explicate the language of early Islamic texts.

With an HPI of 67.98, Ka'b ibn al-Ashraf is the 5th most famous Saudi Arabian Writer.  His biography has been translated into 15 different languages.

Ka'b ibn al-Ashraf (Arabic: كعب بن الاشرف‎; died c. 624) was, according Islamic texts, a Jewish leader and poet in Medina. He was killed on the order of the Islamic prophet Muhammad after the Battle of Badr. 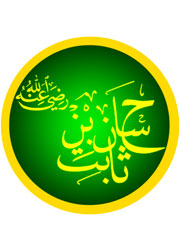 With an HPI of 67.17, Hassan ibn Thabit is the 6th most famous Saudi Arabian Writer.  His biography has been translated into 17 different languages.

Hassan ibn Thabit (Arabic: حسان بن ثابت‎) (born c. 563, Medina died 674) was an Arabian poet and one of the Sahaba, or companions of Muhammad, hence he was best known for his poems in defense of the Islamic prophet Muhammad. He was born in Medina, and was member of the Banu Khazraj tribe. He was gifted Sirin as a concubine. After Muhammad's death, Hassan was supposed to have traveled east as far as China, preaching for Islam along with Sa`d ibn Abi Waqqas, Thabit ibn Qays, and Uwais al-Qarni. His writings in defence of the Muhammad contain references to contemporary events that have been useful in documenting the period. He was also Islam's first religious poet, using many phrases from the Qur'an in his verses. The work of Hassan Ibn Thabit was instrumental in spreading the message of Muhammad, as poetry was an important part of Arab culture. The work and words of Hassan Ibn Thabit are still regarded as the most beautiful in praise of Muhammad. Muhammad was so happy with Hassan Ibn Thabit that he ordered to establish and construct for him a minbar-pulpit for him to stand upon when he delivered his poetry. Muhammad prayed for him saying that the Angel Gabriel will support you as long as you preach the message of Allah and defend His Prophet.He is also the original writer of the famous nasheed "As subhu bada min tala'atihi".He is the earliest known person to mention the events of the Khumm pond, where he mentions that Muhammad appointed Ali as his successor.

With an HPI of 61.27, Al-A'sha is the 7th most famous Saudi Arabian Writer.  His biography has been translated into 16 different languages.

Al-A'sha (Arabic: ٱلْأَعْشَىٰ‎) or Maymun Ibn Qays Al-A'sha (d.c. 570– 625) was an Arabic Jahiliyyah poet from Najd, Arabia. He traveled through Mesopotamia, Syria, Arabia and Ethiopia. He was nicknamed Al-A'sha which means "weak-sighted" or "night-blind" after he lost his sight. He continued to travel even after becoming blind, particularly along the western coast of the Arabian peninsula. It was then that he turned to the writing of panegyrics as a means of support. His style, reliant on sound effects and full-bodied foreign words, tends to be artificial.His love poems are devoted to the praise of Huraira, a black female slave. Even before the time of Mohammed he is said to have believed in the Resurrection and Last Judgment, and to have been a monotheist. These beliefs may have been due to his interactions with the bishop of Najrān and the 'Ibādites (Christians) of Al-Hirah. His poems were praised for their descriptions of the wild ass, for the praise of wine, for their skill in praise and satire, and for the varieties of metre employed.One of his qasidah or odes is sometimes included in the Mu'allaqat, an early Arabic poetry collection done by the critic Abu 'Ubaydah. 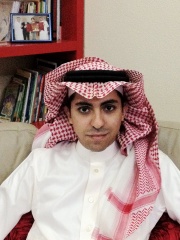 With an HPI of 54.23, Raif Badawi is the 8th most famous Saudi Arabian Writer.  His biography has been translated into 38 different languages.

Raif bin Muhammad Badawi (Arabic: رائف بن محمد بدوي‎, also transcribed Raef bin Mohammed Badawi; born 13 January 1984) is a Saudi writer, dissident and activist, as well as the creator of the website Free Saudi Liberals. Badawi was arrested in 2012 on a charge of "insulting Islam through electronic channels" and brought to court on several charges, including apostasy. In 2013 he was convicted on several charges and sentenced to seven years in prison, torture and 600 lashes. In 2014 his sentence was increased to 10 years in prison, 1,000 lashes, and a fine. The flogging was to be carried out over 20 weeks. The first 50 lashes were administered on 9 January 2015. The second flogging has been postponed more than twelve times. The reason for the most recent postponement is unknown, but the previous scheduled floggings were delayed due to Badawi's poor health. Badawi is known to have hypertension, and his health has worsened since the flogging began.His wife, Ensaf Haidar, who took refuge in Canada after her life was threatened in Saudi Arabia, has said Badawi will not be able to survive further flogging. Ensaf Haidar has given a series of televised interviews about Badawi’s plight, including at the 2016 Geneva Summit for Human Rights and Democracy.The Raoul Wallenberg Centre for Human Rights acts as Badawi's international legal counsel. The organization has led both public advocacy campaigns as well as private diplomatic efforts to help secure Badawi's release from prison. While his exact location is unknown, it has been reported that Badawi is currently imprisoned in Dhahban Central Prison.